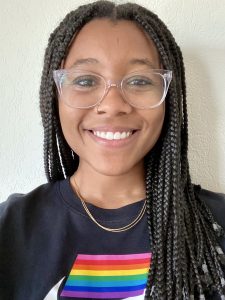 Whitney Williams knows what it’s like to create space for herself and enter a room prepared to make things happen. A recent Pepperdine University Caruso School of Law graduate, she is about to start a job at her dream firm at Littler Mendelson P.C. after connecting with the firm at the 2019 Lavender Law® Conference and Career Fair. Her advice? Don’t let them forget about you.

Whitney always put an emphasis on excellence, considering both medical and law school before deciding to go to Pepperdine Law. She wanted a fulfilling career that would keep her on her toes and be challenging, and saw the potential for that in law. With interests in entertainment law, employment law, civil procedure, and litigation, she could have gone in many directions, but ultimately decided that employment law is her passion.

“Coming into the career fair was like walking into gold”

Whitney’s Lavender Law® story started when, as a 2nd year law student, she saw one of her best friends get a job from the Career Fair. She saw this success and knew she couldn’t pass up the opportunity to go as a 3L. Whitney says, “Coming into the career fair was like walking into gold. I said to myself, all of these firms are here so let’s see what I can do!”

“It’s really cool how many firms show up and show out,” Whitney says. “It was a little overwhelming to take advantage of all the opportunities with around 200 booths.” Whitney recommends finding about five firms that you really want to be sure to connect with. Her number one was Littler Mendelson, because she knew she wanted to practice employment law, and had been pursuing a job with Littler since her first year of law school. Before the Conference, Whitney emailed the Chief Diversity Officers of each firm she was interested in and told them ahead of time that she would be there and would love to connect. She says this was a great way to get her foot in the door and stand out, and she believes it made all the difference. When she got to the Conference, she had the firms she needed to visit mapped out and was able to go down the line to introduce herself to everyone. Whitney advises squeezing in face time with the lawyers at the booth and, above all, doing your research beforehand. “Be able to show that you’re actually interested in the firm and want to be there, that you’re not just looking for any job,” and know what the firm is looking for in a recruit. Whitney knew most students at the Career Fair were 2Ls; because she was attending as a 3L, she proactively got in contact with the LGBT Bar’s staff, ® who shared with her which firms were specifically seeking 3Ls for full-time jobs rather than summer associates.

Littler’s booth and their recruiting team stood out for Whitney. “Within meeting me for five minutes, they were willing to go out on a limb to put me in touch with people, and soon I was in California interviewing.” She got the job at Littler, her dream firm, and will be starting work as soon as the COVID-19 situation de-escalates. She is excited about Littler, because they are not only “leading the world in employment law with the best lawyers in the field,” but also give junior associates work they can do on their own with their own cases, as well as making a concerted effort to develop well-rounded associates. Whitney is excited to have these responsibilities, and to be able to help people.

In terms of diversity initiatives for LGBTQ+ law students, Whitney feels that “a firm that’s at Lavender Law® is already taking a step in the right direction.” Whitney’s experience shows that it’s important to be persistent, to stay relevant to the firms in which you are interested, to do advance research, to be prepared, and to make connections. Her advice: Don’t give up- if you want something, you can make it happen with hard work and dedication.