Brian P. Rice is a prime example of what it means to be a success in the legal field.

He attended our 2003 Lavender Law® Conference and Career Fair as a rising 3L, hoping to network with a handful of firms. Little did he know, the connections he made at Lavender Law would spur him into a great career.

Today, Brian serves as the Vice President and Assistant General Counsel & Chief Litigation Counsel at RailWorks Corporation. He has established himself as one of the most coveted LGBTQ+ lawyers because of the work he has done for the LGBTQ+ community, and considers his time spent networking at Lavender Law to have been a “great success.”

Brian attended Franklin Marshall College in Lancaster, Pennsylvania and graduated with a degree in government. He continued his education in Boston at Northeastern Law School and earned his J.D. in 2004.

Prior to graduating, he secured a position with Shipman & Goodwin by meeting with representatives at the 2003 Lavender Law Conference. Even though the 2003 Lavender Law was smaller then than it is today, it allowed Brian the opportunity to engage with law firms as an openly gay man. Being able to present his true self to employers, he says, was key to his success in landing a position with Shipman & Goodwin. “Lavender Law was the first time I started telling law firms I was gay,” Brian recalled, “The first time I told a law firm that I was gay, I got a job. This is who I am”

Gratification and “the scariest process”

Brian’s work in LGBTQ+ equality began in the mid-2000s in Connecticut, affecting him personally. At the time, there were prominent discussions around the criminalization of same-sex activity, such as in Lawrence vs. Texas. He fought for his marriage, officiated in 2004 in Massachusetts, to be recognized in Connecticut. Brian worked closely with GLAD (Gay and Lesbian Advocates and Defenders) to push for same-sex marriage reform and was honored by the Connecticut Law Tribune in 2005. He was also honored in the 2019 Connecticut Law Tribune publication, available here.

In 2007, he filed a brief detailing the history of same-sex marriage in the United States. He considers this brief one of his greatest achievements, noting that it was “such a gratifying experience to be recognized.”

He is particularly passionate about HIV awareness and raised $29,000 together with Josh Cotham for the Equity Fights AIDS fund by Broadway Cares. One of Brian’s biggest personal achievements was sharing his HIV+ status with his colleagues—the “scariest process” he has ever faced. He firmly believes that education about HIV and AIDS should be more widely circulated, not just in the LGBTQ+ community, but in society at large. HIV-related stigma and discrimination have resulted in tens of thousands of people facing poor treatment, the erosion of their rights, and psychological damage.

In 2010, Brian was recognized by the National LGBT Bar Association as one of the Best LGBT Lawyers Under 40.

As a student, Brian wanted to become a lawyer to “make a difference in the world,” and it is clear that he has succeeded through the many achievements he has attained thus far. His current position with RailWorks Corporation, in which he handles construction litigation by working on contracts and advising legal professionals, has allowed him to continue his work for the LGBTQ+ community.

Brian advises students who are considering attending Lavender Law to be their “true, authentic [selves],” a statement that resonates with all of the LGBTQ+ community. He doesn’t think that students should get trapped into the mold of law school because he believes employers will always value individuality over anything else: “One of the things you will find is that there is still a mindset of a right and wrong answer. Look, dress and act a certain way, and it becomes ingrained in you in law school. It is important to not get trapped in that mold. Law school is intended to mold you in a certain way and it becomes easy to lose your authenticity.” 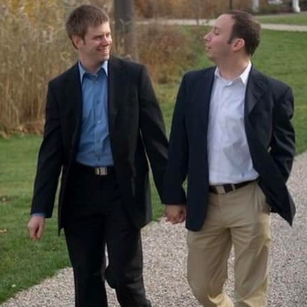